What might smartphones, gambling, sex, and exercise have in common? Behavioral addiction

What might smartphones, gambling, sex, and exercise have in common? Behavioral addiction

In early January, two major Apple stockholders, JANA Partners, LLC and the California State Teacher’s Retirement System, sent a letter to Apple urging the company to address the possibility that overuse of its mobile devices and apps are having a negative effect on the health and wellbeing of young users. The letter cites research indicating that the average American teenager spends over 4.5 hours on a smartphone each day and that 50% report feeling addicted. The amount of time spent in mobile apps across all Americans is increasing at double-digit rates.

These are early days for research into the addictive properties of smartphones, social media, online gaming, and related technologies. But the study of behavioral addiction more broadly is now decades old and growing rapidly. Researchers who study behavioral addiction see strong parallels in how the human brain responds to addictive substances like drugs, alcohol, and cigarettes and potentially addictive behaviors like gambling, shopping, exercise, and, yes, smartphone use. 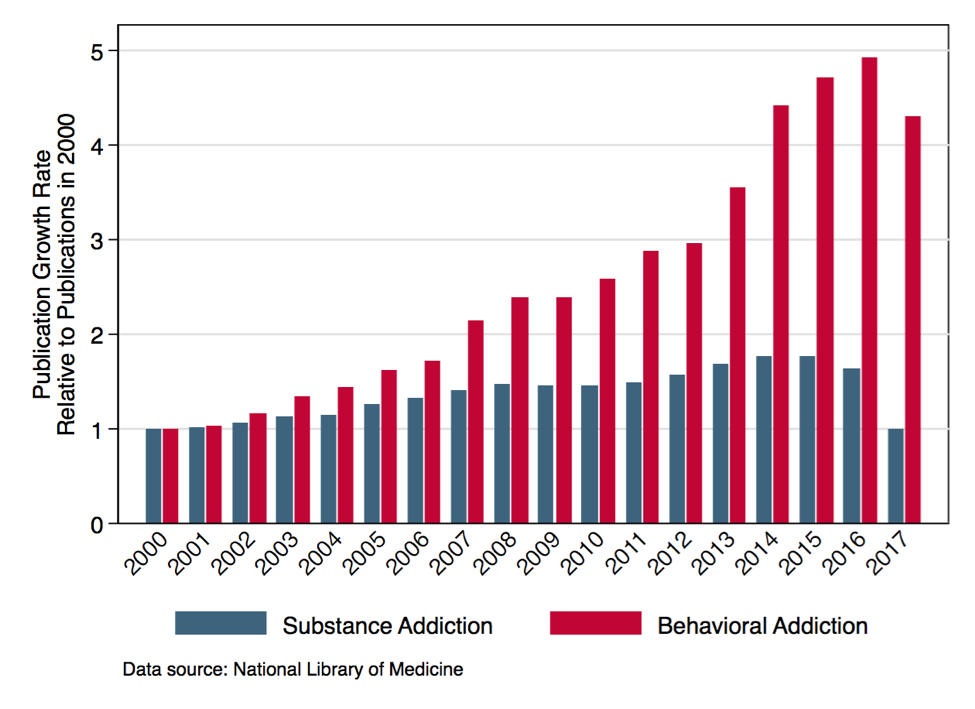 Gambling addiction is not only widely-recognized as a serious condition affecting, by some estimates, between 1-2% of the U.S. adult population, but has also been the subject of personal injury lawsuits. In 2013, for example, Stacy Stevens sued Mountaineer Casino and slot machine maker International Game Technology over the death of her husband, Scott, who committed suicide after losing more than $4 million over a period of six years (much of which was embezzled from his employer). The suit alleged that the companies used sophisticated marketing and gaming technology to prey upon Scott’s addiction. To date, courts have ruled that the gaming industry does not owe a duty of care to patrons who suffer from problem gambling, but were a duty of care to be admitted, plaintiffs whose lives or family members’ lives have been ruined by gambling could have a compelling case to make to a jury.

If some individuals succumb to gambling addiction, it is perhaps not that far-fetched to think that some individuals could fall prey to smartphone addiction. In his 2017 book, Irresistible: The Rise of Addictive Technology and the Business of Keeping Us Hooked, social psychologist and marketing expert Adam Alter details a wide-range of practices commonly employed by smartphone and app developers to keep consumers constantly engaged with their products from incessant visual and audio alerts to tracking social media likes and counting steps. Much like tobacco and gambling companies, today’s technology companies manipulate and profit from our deeply-ingrained addictive tendencies.

What harm, if any, though, is done when individuals become “addicted” to their smartphones? Whatever one might think about the culpability of the individual, it is undeniable that substance addiction has the potential to cause serious harm. While there is considerable social anxiety regarding the potentially negative consequences of smartphone addiction — social detachment, inattention, physical inactivity — the long-term tangible damages to human health and well-being (beyond accidents caused by distracted driving and walking) are not understood at this time. A recent study documented a sharp rise in mental health issues and suicide among teenage girls between 2010 and 2015. Could it be related to the rise in smartphone use? These authors, at the very least, wouldn’t rule out the hypothesis.

At Praedicat we’re systematically monitoring the accumulation of science investigating how hundreds of commercial activities affect human health. Given the role that addiction played in establishing liability in the $250 billion tobacco litigation, Praedicat is expanding its monitoring of the biomedical research and its implications for liability to include addiction, with analyses expected on a range of both substance- and behavior-related addictions such as opioids, sugar, gambling, and the most quintessential of modern risks, smartphones. Stay tuned!

The investors believe both the content and the amount of time spent on phones need to be tailored to youths, and they are raising concern about the public-health effects of failing to act.

Heart disease deaths may be due to low levels of lead