Could warning labels reduce sugar consumption (and the threat of sugar litigation)? 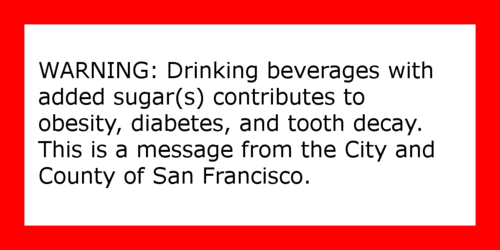 Could warning labels reduce sugar consumption (and the threat of sugar litigation)?

San Francisco’s warning label ordinance was blocked by the 9th Circuit Court of Appeals last September. But just this January, the 9th Circuit indicated that it would reconsider its earlier decision with an expanded 11-judge panel, which keeps the city’s ordinance alive for now.

There is some evidence to suggest that warning labels affect consumer choice. Researchers have found, for example, that posting calorie counts on menus causes diners to choose less caloric meals and a study published last December found that placing warning labels at the point-of-sale could reduce the consumption of sugar-sweetened beverages and reduce the prevalence of obesity.

At Praedicat, we’ve been tracking the science around sugar consumption for years and thinking about the potential for this science to support a sugar-related mass litigation event in the future. What if plaintiffs could establish that their over-consumption of sugar caused their obesity? Would courts hold sugar-sweetened beverage companies liable? Courts to date have not accepted plaintiffs’ arguments. One reason for this is that courts have held that plaintiffs are responsible for their own injury: A reasonable person should know that over-consumption of sugar can be harmful.

The placement of warning labels on sugar-sweetened beverages would drive this argument of personal responsibility home and perhaps make it more difficult for future plaintiffs to establish liability. But what if sugar is addictive? The science supporting the contention that sugar is addictive is far from settled, but, if it is, then warning labels could be less effective and perhaps afford less protection against future lawsuits. Unless, that is, soda labels were to go the route of cigarette labels, which warn consumers that cigarette smoking is not only harmful to one’s health but is also addictive.

The ordinance would have required 20 percent of an outdoor soda ad be outfitted with a black-box warning label saying: “WARNING: Drinking beverages with added sugar(s) contributes to obesity, diabetes, and tooth decay. This is a message from the City and County of San Francisco.”