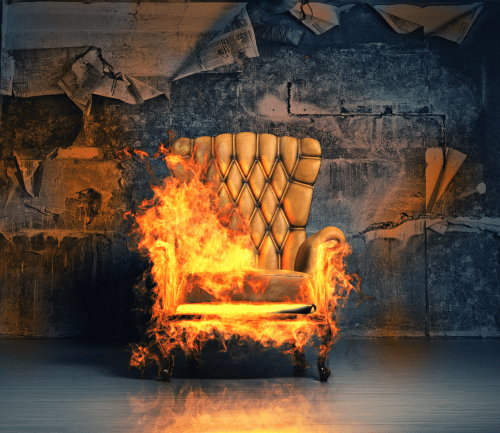 Imagine the sight and sound of a sofa engulfed in flames juxtaposed with the question “Are you sitting comfortably?”  This last-minute media campaign by the industry-funded lobby Citizens for Fire Safety effectively ended the California legislature’s effort to reduce flame retardant use in 2011.  The tables have turned in the intervening years, however, and it is now manufacturers of flame retardants and downstream users who are sitting uncomfortably.

By most accounts, California was largely responsible for the introduction of flame retardants in household furniture when it passed its furniture flammability standard in 1975.  The standard required upholstered furniture to withstand a 12-second exposure to a small, open flame.  Furniture manufacturers in California, and soon nationwide, responded to the standard by adding chemical flame retardants to fabric and foam.

The brominated flame retardant most commonly used in the 1980s – pentabromodiphenyl ether (PBDE) – is now banned as a persistent organic pollutant under the Stockholm Convention.  Its replacement, decaBDE, has also been banned.  However, other brominated and chlorinated (“halogenated”) flame retardants, and there are many, are still in widespread use around the world.

Halogenated flame retardants are hypothesized to adversely affect immune, endocrine, reproductive, and nervous system functioning and some may increase the risk of cancer.  By our measure, the epidemiological evidence is strongest for the now banned pentaBDE, but scientists are generally concerned about the entire class of halogenated flame retardants for their persistence, bioaccumulation, long-range transport, and potential toxicity.  And now scientists are voicing concern over an emerging class of flame retardants known as non-halogenated organophosphates (e.g., triphenyl phosphate, tris(methylphenyl) phosphate).

With dozens of flame retardants on the market today, regulators are coming to believe that a chemical-by-chemical approach to regulation is inadequate.  The experience with penta- and decaBDE is informative.  These flame retardants are banned yet exposure remains high due to their persistence.  The inventory of furniture, electronics, and other products will continue to release these chemicals for years and, even when disposed, may return in recycled plastic and foam products, including toys and carpet padding.

And as soon as one flame retardant is banned, a close relative with little specific science, takes its place in the market. Tetrabromobisphenol A, for example, is now the highest volume brominated flame retardant produced worldwide, and scientists are worried that we’ll come to find out that it is just as harmful as the ones it replaces.

Which brings us full circle back to California. In 2014, California rewrote its flammability standards for residential upholstered furniture. The standard now states that upholstered furniture not continue to smolder 45 minutes after a lit cigarette is placed on it.  The standard recognizes that cigarettes, not small, open flames like candles, are the most significant cause of furniture fires. The use of flame retardants is not necessary to achieve this revised standard.  Indeed, although industry would argue otherwise, analyses by CPSC and others suggest that flame retardants haven’t done much to reduce furniture- and television-related fires. Evidence suggests the move to self-extinguishing cigarettes and declining rates of smoking overall, on the other hand, has markedly reduced house fires in the U.S.

Perhaps most indicative of changing attitudes about flame retardants?  Firefighters were once among the strongest advocates for flame retardants.  They now question their effectiveness and are outspoken about how flame retardants could be affecting their health.