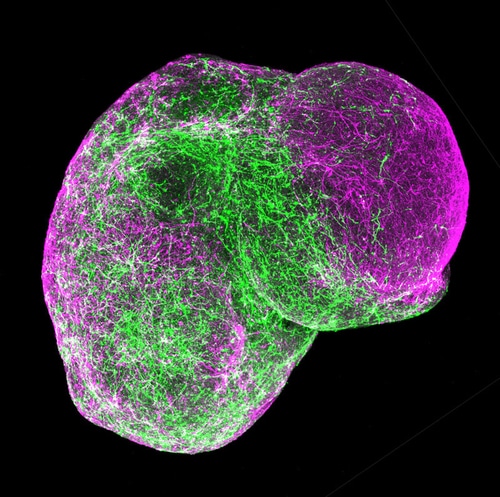 Scientists are growing increasingly sophisticated three-dimensional miniature brains and other organs (“organoids”) — stomachs, kidneys, livers, prostate glands, pancreases — in order to understand disease processes and formulate more effective treatments. As this technology advances, bioethicists are urging researchers and their funders to get ahead of the thorny ethical issues involved.

Nowhere are the ethical issues more complicated than in the case of minibrains. Madeline Lancaster in 2013 is credited with first demonstrating that complex neuronal tissues can be created in vitro from pluripotent stem cells. Since then the size and complexity of minibrains have increased substantially. In the past year, for example, researchers have reported growing brains that respond to light, undergo wrinkling, and sprout blood vessels.

The technology is advancing so rapidly that bioethicists have begun to ponder what protections these minibrains might afford. What if these brain tissues appear to have “conscious experiences or subjective phenomenal states,” as a group of neuroscientists, stem-cell bioglogists, ethicists, and philosophers asked late last month in a commentary published in the journal Nature? Although no lab-grown minibrain has achieved “consciousness,” it no longer seems far-fetched that one day one might. How do we then measure sentient capabilities so that we can make ethically-defensible research decisions? Minibrains (and other organoids) implanted in animals will begin to blur the distinction between humans and animals; even our notion of death becomes challenged.

The moral quandary, of course, comes because minibrain technology holds so much promise for treating neurological disease. Take the case of autism. In a 2017 study, researchers used minibrains to demonstrate that a genetic disorder called “Timothy syndrome” impedes cell migration during the 2nd and 3rd trimesters of pregnancy and that treating the minibrain with a calcium blocker can restore proper cell migration in vitro.

Minibrain technology is also driving new approaches to environmental toxicology. With minibrains, chemicals can be screened much more quickly and effectively for their potential effects on brain development. Chemicals that appear to pose some risk, can then be prioritized for further investigation employing these models as well as more traditional (and expensive) animal and epidemiological approaches.

At Praedicat we’re monitoring scientific literatures addressing hundreds of hypotheses of bodily injury, including the possible link between exposure to chemicals in products and the environment and neurodevelopmental diseases like autism. While epidemiologists are actively investigating the association between autism and a wide range of environmental exposures including traffic-related air pollutants, bisphenol A, phthalates, perfluoronated compounds, flame retardants, pesticides, metals, and volatile organic compounds, a causal link between these environmental exposures and autism is far from established due to the difficulty of measuring exposure and autism incidence and controlling for the myriad correlates of autism. The controlled human experiment remains the gold-standard for teasing out cause and effect, but minibrains that increasingly mimic the actual development and functioning of human brains will likely greatly advance our understanding of the environmental determinants of neurological diseases like autism in the near future.

These models could provide a much more accurate representation of normal and abnormal human brain function and development than animal models can… In fact, the promise of brain surrogates is such that abandoning them seems itself unethical, given the vast amount of human suffering caused by neurological and psychiatric disorders, and given that most therapies for these diseases developed in animal models fail to work in people. Yet the closer the proxy gets to a functioning human brain, the more ethically problematic it becomes.